Thank you again for all of your pledges and donations. A special note of thanks to Sean Coleman and his team at Air Ambulance New Zealand who will be transporting us to the airport tomorrow morning. He has donated his services which would usually have incurred a very competitive fee  of NZ $595.00 Thank you Sean for your time and sage advice. Cheers, James

Hi everyone this is a last minute fundraising plea to everyone as private citizens.

I am organising for our non-resident patient “Jak” to return back to Samoa. (Real name changed.)

Has been trying to get back to the Islands for the past month, but hampered by critical illness.

He has stabilized at present and we have one shot at getting him back tomorrow morning at 0915. He can travel if escorted by a doctor. The most discounted fee for a doctor I could negotiate was $3800, which the family could not afford.

I have volunteered my services to look after him on the flight to help Jak get back.

So close but yet so far…

Please forward this email on to your own teams and networks.

Every bit pledged will count. I will consider all pledges of assistance.

For those interested in following the journey I will attempt to live tweet/blog it through Twitter:  @palliverse #getjakbak and www.palliverse.com

Thank you for your consideration,

Just need $1330 to grant this young man his dying wish of going home to his family. We can do this team!

Thank you everyone we have done it! Any extra funds raised will go towards payment of hospital fees.

Thank you for helping your fellow man. I am proud of you all!

It gives us some themes found in the various decisions made:

-Futile medical treatment is not in a patient’s best interests.

-Treatment that is overly burdensome is not in a patient’s best interests, even if the patient is unconscious or unaware of treatment burdens.

-Courts have generally not engaged expressly in quality-of-life assessments, but they remain relevant for determining best interests when considering the patient’s medical condition and prognosis.

-The interests of other people and organisations (including the wider health system) are generally not relevant when determining a patient’s best interests.

-Courts have generally deferred to medical practitioners’ opinions about treatment decisions, even when the patient’s family has strongly opposed them.

Have you had any sticky end of life issues recently and crossed paths with our legal brethren?

“And I want one at the hospital, one here at the nursing home and one with the GP.” P and I have just been talking about the breathing difficulties that led to him being hospitalized last week. END_OF_DOCUMENT_TOKEN_TO_BE_REPLACED

Like Loading...
Professionally when “Ethics” is mentioned it is usually in fairly specific ways.  In a health care context Ethics is often associated with particular areas of question or conflict.  Ethics is the process that we have to satisfy to be able to do the research that we think is indicated.  My decision about whether Mr Smith has the “right” and the “capacity” to be able to make a particular decision is an ethical one.  I use words like “autonomy” and “justice” to explain the reason why Mrs Tran should be offered a treatment.  Our clinical teams have policies about our duty to provide ethical care for violently confused patients. We debate about issues like euthanasia on grounds that we describe as ethics focused on the rights and wrongs of changing our current clinical approach. Each of these are complex questions and the fact that they are so divisive demonstrates to us the difficulty (or even impossibility) of determining a path forward that satisfies everyone.  Sometimes I wonder if it is for this reason that Ethics seems like such a frustrating topic.  Why spend time thinking and talking about Ethics when the only thing we can be confident about is that someone’s answer is always going to be, “I disagree”? 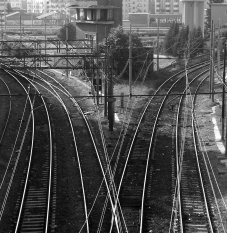 Now, which way to choose?

END_OF_DOCUMENT_TOKEN_TO_BE_REPLACED

Trial published in JCO suggests even experienced clinicians benefit from communication skills training… AND so do their patients!

A study by Fujimori and colleagues examined the effects of a person-centred communication skills training program for 30 oncologists who were randomised to either receive the training or not. A total of 1,192 patients who had consultations with participating oncologists reported their psychological distress, satisfaction, and trust in the oncologist. In addition, oncologists were objectively assessed on their performance and confidence in communication using simulated, videotaped consultations. Those oncologists who received the training improved on several communication outcomes. While the training did not significantly impact patient’s satisfaction with their oncologist, patients reported greater trust in their oncologist and less depression. Results suggest experienced clinicians (9.3 – 30.3 years of practice) can benefit from communication skills training, and accordingly, so do their patients.

He does not want to talk to me, that much is clear. He has had enough of doctors. He is a man of few words. His eyes do not meet mine. His coarse, calloused farmer’s hands play purposelessly with the starched white of the hospital bed sheet. The gentle hiss of his oxygen is barely heard over the hum of the city traffic below.

Out of his element.

“Tell me, what have the doctors told you about your medical condition?”

A useful question. I need to know how much he knows about his cancer. Not just what he knows, but what he doesn’t know and importantly, what he wants to know.

I have three cancers, he tells me. Lung cancer and brain cancer and bone cancer. The treatment isn’t working. There’s nothing more they can do for me.

A good start. I hit the last bit first. There is always something we can do for you, I say. It’s true, we can’t cure your cancer. But I want to talk to you about the pain you are getting, and the cough. Are there any other symptoms you’d like me to think about? I pick up a few new symptoms that have not been discussed before; low mood, low appetite, altered taste. He becomes more animated. We discuss treatment options and come up with a plan.

I am under some time pressure as he is to be discharged later today, back to the country, several hours drive away. I have fifteen other patients to see. I need to work fast while appearing to work slow. I elect not to correct him on there being three different cancers as I have other things I want to tackle first.

It’s a big ask for a man without high levels of health literacy and education who has just had shocking news. This is my challenge — to put information into terms that he can understand and remember. I pull out a piece of paper to summarize what we have talked out as I go.

Sometimes, often, my agenda is different to the patient’s; it’s good to be aware of this. My agenda today is to talk to my patient about dying and end of life care. He will probably not see another specialist in palliative care in the future.

“Are there any other questions you would like to ask me? Anything that’s worrying you that we have not talked about?”

No, he says. Yes, he means. He looks away. I wait. It’s harder than it sounds. I am better at talking and listening than silence. Silence is a tool, I remind myself. I count to ten very slowly.

I would rather not do this now, but I won’t see him again. Would you like to talk to me about dying?

“I saw my mum die,” he tells me. It was a bad death, with confusion, pain. We talk about his mother’s death. Often, care for the dying is not just about the person, it lives on in memories of those who watched, for decades.

We move on to the specifics of what is likely to happen to him in the next few weeks, the plans to manage his care. Oxygen. Don’t smoke with oxygen. Medications. Who to call if things go wrong. I reassure him that he should be comfortable, that plans are in place to look after him at home, we will speak to the district nurses and to his family doctor about what he might need. Options for care at home or at the local hospital. We agree he does not want to come back to the city again. He does not want to talk about the actual dying bit so I leave it. I give him the piece of paper with the summary of what we have talked about, and make the same old joke I always make about my bad handwriting. If you have any other questions or worries, please feel free to ask, I tell him.

“Thanks,” he tells me and his eyes meet mine again. “I really appreciate you talking with me.”

Sonia Fullerton is a palliative care physician in Australia and can be reached on Twitter @sonialf.

From the Australian Research Council

Check out other funding opportunities at CareSearch.

What the heck was going on in the lounge? A patient’s family and the doctors were sitting on the floor with their legs crossed. Were they about to break out into song? Kumbaya my lord, Kumbaya…? Was this part of the Hospice Yoga Initiative? Mat-time at a new New Zealand charter school? No, it was actually a family meeting.

Family meetings are common occurrences in healthcare settings and are organized in order to convey a point of view, or to try to bring together disparate points of views. These events may actually be the first chance that some of the key stakeholders, i.e. the family and the healthcare team, actually have to meet each other. The first time that the next of kin has made time to meet with the health care team looking after their loved one. First impressions as within any first meeting are important. As you can only meet for the first time once, you’d better do your best to make sure it goes well. In order to establish a trusting therapeutic relationship between the patient, their family and the health-care team, rapport must be established quickly. Every encounter can count, but not everything can be planned for. END_OF_DOCUMENT_TOKEN_TO_BE_REPLACED

Applications for 2015 PhD scholarships are due on 6th February, 2015. Details can be found here.