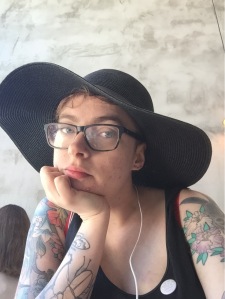 Palliverse welcomes a new contributor today. Elizabeth Caplice is an archivist on hiatus. She has Stage IV colorectal cancer, and writes about cancer, and how it intersects with life, particularly in younger adults. Elizabeth has shared a recent photo, to show that “stage IV cancer looks far broader than just some elderly hands with a cannula in them.” (Try doing a Google image search for “palliative care”.)

We recommend Elizabeth’s excellent blog  Sky Between Branches and her Twitter feed. As always please leave responses in the “Comments” box below.

Today, I saw my oncologist, and got dealt more bad news.  Stage IV cancer life is mostly bad news, and you come to expect it.  The cancer has spread, again, after only two weeks off chemotherapy – which I needed to take due to my blood count consistently dropping to dangerous levels.  He gently told me that if it was in my bones now, it wouldn’t be shocking, because I was diagnosed with Stage IV rectal cancer a year and a half ago.  I have done remarkably well.

I’m 31 years of age, and I do not know if I am ‘terminally’ ill. I know the definitions of what terminal means, exactly, seem to shift somewhat, but my medical care, my surgeries, my chemotherapy, and my radiation is all planned at palliation, rather than curative measures.  I have cancer in my rectum, my liver, and my lungs, and it is clear that my liver will be what kills me, as is the case for most colorectal cancer patients.

One thing that has been difficult for me throughout my treatment process has been the fact that in most of the media around terminal illness – particularly terminal cancer, euthanasia, pain control and palliative care, the only patient voices that are highlighted are high profile terminally ill elderly people.  Oliver Sacks and Clive James have written and been published about this, but when it comes to being a young voice, and for that matter, a young writer who wants to discuss terminal illnesses and palliative care in younger people, there tends to be a lack of interest in publishing these voices and opinions. There are also the more subtle points. I can’t even remember the last article I read on end of life care that didn’t mention ‘elderly’ several times, or that included even a single mention of younger adults and their needs.  Even down to images used on websites – wrinkled hands with cannulas, hospital beds with elderly people.  This is the image of the terminally ill. This is what palliative care is represented as being, while the reality is so much broader.

I wonder if it is partly because it is a confronting thing to read. When we hear of elderly people dying or preparing to die from a terminal illness, it is sad, but it is something we can conceptualise and understand.  When someone speaks unapologetically about their experiences as a young, otherwise healthy person who is receiving palliative treatment, it is either not ‘sexy’ enough, or too hard to see, and too hard to face.  We are told to ‘fight’, and to ‘not give in’ and to ‘keep up hope.’  Hope may be a potent thing for some people, but for me, it sets me up for consistent disappointment.  My disease, with the current treatments available, can be slowed. It cannot be cured. It will most likely kill me within five years of diagnosis.  It has been a year and a half now, and I feel that clock ticking.  But what are the unique needs of palliative care for younger adults? These are things I’ve thought about, and never had a chance to really read about.

In no way do I view my approach as giving up.  I still dream of an immunotherapy becoming available for colorectal cancer, or of a spontaneous remission.  But I know that these are not things that are likely to happen. I know that, most likely, I will die within the next 3-5 years, and I would rather make my treatment and life decisions with that thought in mind, rather than planning on a life that I am most likely not to get. There is a strange disjuncture because I physically feel almost completely normal outside of the day or two around chemotherapy.  I have the occasional twitch of pain, and some days where I am less hungry than others, but aside from that, I am fairly robust.  I do not look ill.  I often do not feel ill. And I am dying.  How does this fit in? Who voices this experience? How do I, as a writer, voice this experience? I grapple with these questions a lot.

I feel like my experiences and views of this are, however, deeply influenced by the blessing I have had in my medical team. I have been remarkably well supported from diagnosis to my present point by my entire medical team – the nurses and doctors, oncologists and GPs and surgeons, the reception staff in the cancer centre I am treated at, the oncology social workers, and my oncology psychiatrist.  This is why I have survived, and I think this is also largely why I am able to take a ‘realistic’ view of things, as morbid as I may sound, and as challenging as it may be.

31 thoughts on “How does it feel to be young and dying?”