With a theme of ‘Fit for the Future’, the 13th Australian Palliative Care Conference utilised a coordinated and multifaceted social media strategy to enhance the delegates’ experience and reach new audiences globally. This was achieved through the concerted efforts of team Palliverse (@Palliverse) and other key individuals, including Christian Sinclair (@ctsinclair).

Not surprisingly, most tweets were posted during the conference period (see figure below). However, Twitter activity in the days after the conference provides evidence of ongoing discussions about the conference on social media. Interestingly, the tweets and impressions in this latter phase were generated by slightly different participants, which suggests that new audiences were being reached through re-tweeting.

The conference experience was further extended to Facebook and other social media platforms such as Instagram and LinkedIn. This allowed additional audiences to be reached, as different platforms are often utilised by different users and/or for different purposes. 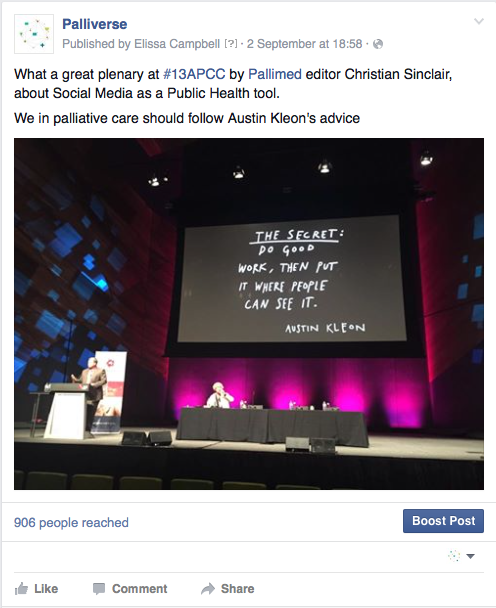 Two social media workshops were conducted during the conference. The first was aimed at advanced users and led by Christian Sinclair. The second was targeted at beginners and involved hands-on tutorials from members of team Palliverse. Further assistance with signing up to, troubleshooting and navigating different social media platforms was provided by the team during meal breaks at the Recharging Station – where people could recharge their devices while discussing/experiencing social media! A number of beginners participated enthusiastically – including many senior clinicians, managers and leaders! As Christian noted: “social media is a great leveller”. 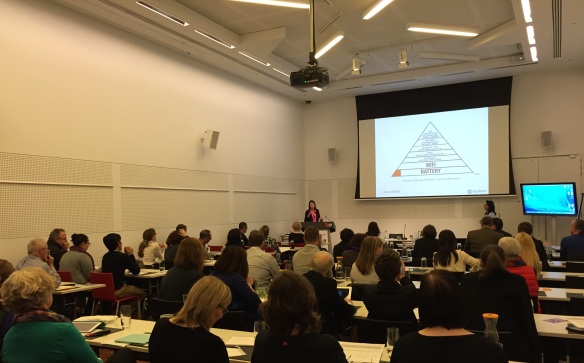 The second workshop was also deliberately scheduled to coincide with the weekly Hospice and Palliative Medicine tweetchat (#hpm). As most of the participants of this tweetchat are from North America, this allowed for a live demonstration of the power of social media to overcome vast distances and facilitate a free exchange of ideas. It also helped to broadcast the conference to an entirely new audience.